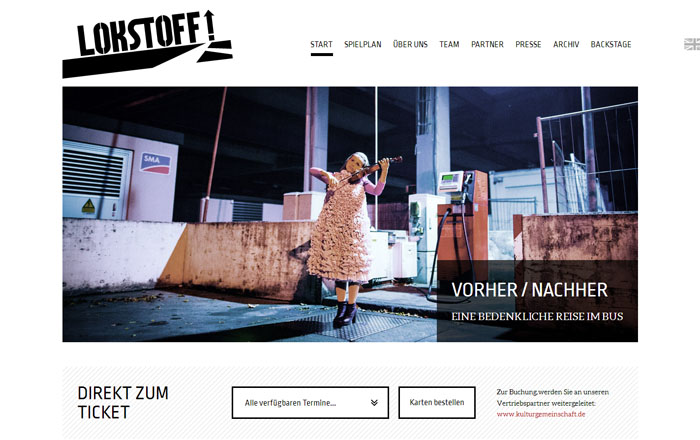 LOKSTOFF! takes the liberty of acting where life takes place!

LOKSTOFF! Theatre in public space exists since 2003 as a registered non-profit association. The theatre was founded by Wilhelm Schneck and Kathrin Hildebrand, who until today hold the position as artistic directors together with Alexa Steinbrenner. Depending on the different projects, the team is complemented by various colleagues, directors, visual artists, architects, graphic designers and other creative professionals.

We work as an open and dedicated collective. Our themes revolve around the problems and challenges of an urban society living with the risk that people become more and more alienated from themselves, their work and the public space.

LOKSTOFF! doesn’t only play in and for the public space but also about it. We broach the issue of the public space in its political, cultural and urban dimension in order to increase the spectators’ awareness of the problems and to provide thought-provoking impulses. Accordingly, performing in a public space does not only dramatize the places in the public, but it also raises awareness about the importance and the meaning of the public and public space for a functioning community. LOKSTOFF! considers itself as a socially committed theatre that stands up for the protection and stabilization of the public space.

We are looking for specific places, reflecting the contemporary, urban everyday life where architecture and infrastructure come alive and where people get together. The places grow stronger by the performance. It is the place with its people which co-writes the script of every play and creates the motor of every performance.

The rehearsals and performances in public spaces also draw attention to people who rarely or never go to the theatre, but many of them come back as spectators. Especially young people are attracted by the unusual places and direct action.

Our core team consists of five people. LOKSTOFF! doesn’t have permanent employees - everyone works on a freelance and above all on a ideational basis.
For the past 15 years, LOKSTOFF! realized 24 productions, contributed to poetize our urban everyday life, and with a capacity utilization of 98% reached more than 160.000 spectators. Since 2018, LOKSTOFF! is institutionally funded by the city of Stuttgart.

Any reflection about the subject of public space has to begin with the opus “Verfall und Ende des öffentlichen Lebens. Die Tyrannei der Intimität” (The Fall of Public Man) of the American sociologist Richard Sennett.

Horizontal tension
The internal-external tension between private space and public space is referred to as “horizontal tension”. We assume that any viable and livable community and culture can only be based on the balance of these spaces. If the balance between privacy and public is disturbed and the people seclude themselves in their private space, it will lead to a “return to tribal life”, where society drifts apart into numerous closed societies without any meeting space that might connect them. The stranger outside of the familiar sphere will then potentially become a projection area of fears and fantasies.

Vertical tension
The concept of “vertical tension” developed by Peter Sloterdijk in his book “Du musst dein Leben ändern” (You must change your life) describes circumstances in which individuals demand high standards of themselves and actively work on obtaining growth by practicing.

These three aspects can be brought together in one simple sentence: Where do we live, how do we live, what do we want? The “where” is the body of the town as a whole made up of numerous individual places. The “how” represents the interior-exterior circumstances. The “what” represents the value-oriented circumstances of the above and the below. It is the goal of our work to make it possible to experience these three aspects in a theatrical way.

Since 2004, LOKSTOFF! offers specially designed performances for the blind. From 2008 till 2010, we worked successfully in the area of educational theatre for the projects “Komet” and “In the streets”. In 2012, we began our intercultural involvement for integration and mutual understanding with “Revolutionskinder” (Revolution Kids) for which we won the Stuttgart Citizen Award in the area of culture and which was funded by “JEP-Kultur macht stark” until 2016.

On this basis, we started a cultural language course “Sprache macht stark (language makes you strong)” for young refugees in 2014.

In October 2015, we had our first performance of “Pass.Worte. Wie Belal nach Deutschland kam.” (Pass.Words. How Belal came to Germany), taking place in a specially converted shipping container. The play is based on a true story of the escape of one of our language class participants and should remind us that there is an individual story and name behind every refugee’s fate. It is of great importance to us that we can offer this play free of charge to schools in Stuttgart and the surrounding area. Ever since our premiere, more than 12.000 pupils/students have seen this play. The Drama in Education Association (Bundesverband für Theaterpädagogik) in Berlin awarded us the first prize for “innovative theatre projects with refugees” for “Pass.Worte”.

Since 2018, we work on the performance #Iseeyou together with our youth ensemble. It’s a performance about tolerance, understanding and goodwill in the public space. With the second season of #Iseeyou, the youth ensemble developed a play, in which the young people rediscover their voice. What are the concerns, values and positions of young people? A manifesto of the youth, a party platform, a call for communality.

2010 we started our international work.

In 2010, we began our lively exchange with the Istanbul theatre Altidan Sonra Tiyatro. The goal of our first cooperation was a play about the same subject in both cultural areas. The result was “Himmel über Stuttgart – Engel 1” (Heaven above Stuttgart – Angel 1) resp. “Himmel über Istanbul – Melek 1(Heaven above Istanbul – Angel 1), two plays dealing with the metaphor of the angel, which were also performed in the partner cities.

Funded by Tandem, yet another cooperation could be realized in 2012. Yaman Ömer Erzurumlu, an Istanbul actor and director, took over a role in the production “Grand Hotel Abgrund” (Gand Hotel Abyss) and was thus able to gather first-hand experience with the theatre in public space, which until was non-existent in Turkey. In order to change this, Wilhelm Schneck in turn took over the direction of the very first production in public space in Turkey with the play “Yokus Asagi emanetler / Altvertrautes entlang der Gasse” (Memories entrusted along the alley) of the theatre Altidan Sonra Tiyatro, which turned out to be a tremendous success in Turkey.

In 2012 we were invited to the festival "Use the City" in Kosice in Slovakia with our production „Heaven above Kosice Angel 1“.

The next mutual production “Sorunlu Insan Kaynagi” with both directors, W. Schneck and Ö. Erzurumlu, had its premiere in an Istanbul gallery in 2014 and was performed in Stuttgart on the occasion of the 15th anniversary of the German Turkish Forum.

In 2016, Lokstoff! continued its international cooperation under the conjoint name of “HAYMATLOS”. On October 1st, our partner theatre had an overwhelmingly successful premiere with the play “ Pera`nin Zamani” despite the difficult circumstances in Istanbul. Our premiere of “Im Ausnahmezustand / Der selbstsüchtige Riese” (State of Emergency – The Selfish Giant) followed on November 11th, 2016 at “Gerber” and was highly praised by the media and audience.

In 2017 and 2019 Lokstoff! was part of the Erasmus programme of “echodrama cultural group” in Greece.

From 2019 to 2021 Lokstoff! will be part of the European project “theatre without borders”, initiated from the Insitute of Tolerance in Poland.

Born in the Black Forest in 1967, the actor looks back to more than twenty five years of working in the theatre business. He was trained as an actor at “Theater tri-bühne” in Stuttgart, being part of this ensemble for over a decade. In 2003, he founded LOKSTOFF! Theater im öffentlichen Raum. He’s been successful as a director since 2006.

After completing her acting training, she had numerous engagements at Staatstheater Stuttgart, Altes Schauspielhaus Stuttgart, Theater tri-bühne, Stuttgart, etc. In 2003, she founded LOKSTOFF! Theater im öffentlichen Raum together with Wilhelm Schneck. Furthermore, she can be seen in numerous film and TV productions and also works as a speaker.

After her acting training at Schauspiel-Akademie in Zürich, she had different engagements in Bremerhaven, Hannover, Bonn, Dortmund und Hamburg. In 2008, after a creative break with her 3 sons, and after having written 3 children’s books plus the novel “Die Mauleselin”, Alexa Steinbrenner was drawn to the stage again. Ever since the production of “Suchmaschine Deutschland – Ein Dialog in der Hölle” (Search Engine Germany – A Dialogue in Hell), she has been a permanent member of LOKSTOFF!

Born in 1962, Werner Kolk studied philosophy, German studies and history in Köln and München. He has been living in Paris since 1990, working there as a speaker and dramaturg. Ever since the production of “Suchmaschine Deutschland – Ein Dialog in der Hölle” (Search Engine Germany – A Dialogue in Hell), he’s been working permanently as a dramaturg for LOKSTOFF!

After her studies of “Media and Communication Management”, she worked in the colorful world of advertising for a few years until she came to LOKSTOFF! Ever since the production of “Prometheus Reloaded 6.0”, she’s been a permanent member of LOKSTOFF! taking over the production management of the respective projects.

Born in 1970, Nicola Merkle studied theatre studies, art history and German studies. After working for the Festpielhaus Baden-Baden, debitel and advertising companies, she now works at the branch office of TC-Doggenburg. Since 2015, she’s part of LOKSTOFF! responsible for conception and production management.

Oliver Cordes has been working as a technician for years in various sectors: theatre, concerts, events, voice and sound mixing, etc. For the past eight years he’s been with LOKSTOFF! as a technical manager. He always finds solutions no matter how challenging a technical problem might be.